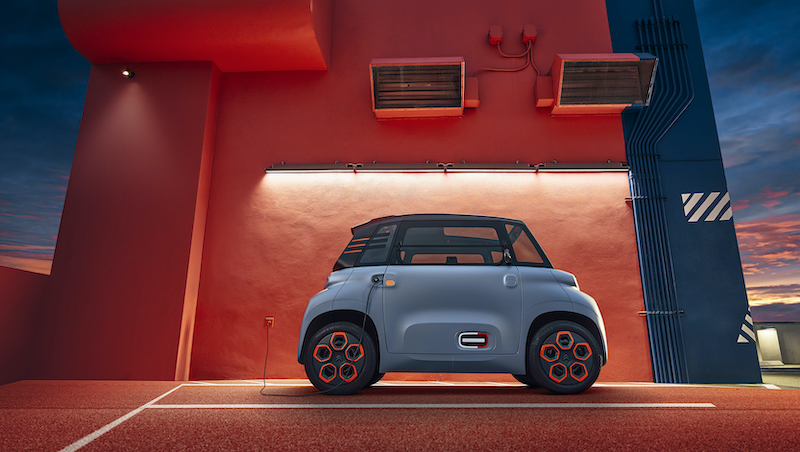 The Citroen Ami is like no other car. And that’s partly because it isn’t quite a car. Technically it’s a Quadricycle – a four-wheeled vehicle with limitations on performance (can’t exceed 28mph) and weight (must be well under 500kg). In many European countries these can be driven without a driving licence; in France from just 14-years old. In the UK you need a scooter licence at minimum – so you’ve got to have passed your compulsory basic training.

Ami weighs 485kg – a little heavy for a petite Parisian mademoiselle – but très léger for an automobile that can transport two people and a roll-on suitcase, plus a bit of shopping, around town (a Quadricycle is not allowed on motorways and dual carriageways). But don’t go venturing further than 43 miles (real world a little less) as that’s the all-electric Ami’s range.
Yep Ami is an EV and you can charge her up and have her ready to go in three hours from a home wall socket. This thing has a 5.5kWh lithium-ion battery and a 6kW motor which is the same power as 1904 Rover 8 (about 8hp). To be fair that was also a two-seater weighing about 500kg.

Citroen has employed a steel spaceframe chassis and made Ami front-wheel drive. Built in Morocco, it’s less than two and half metres long and well under one and half metres wide, plus the body panels are made of plastic. And if you’re thinking the front and back look the same, give yourself a pat on the back, because they actually are. It’s just there’s headlights in one panel and taillights in the other. 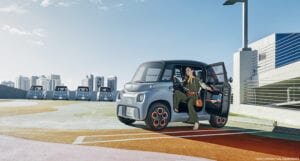 This is done, quite simply, to keep the costs down – produce one panel instead of two different ones. Similarly, the doors in each side are exactly the same. Those of you blessed with acute spatial intelligence are about to point out that the hinges would have to be moved at the very least. Nope, they weren’t. Hence the driver gets a rear-hinged suicide-style door – which is actually a cool way to step out of this little runabout – and the passenger a conventionally hinged door.

A lower half window panel flips up to open the side windows (like the old Citroen 2CV) to pay for tolls and collect burgers at drive-thrus, and huge glass furnishes not just the front and back but the roof too – so much so, that visors are redundant and a hat and sunnies will be a must on bright sun-shiny days. Which will be every day when you’re out with the amiable Ami.
Inside it’s spartan, but straightforward – why have a stereo and sat-nav when a phone-holder will do? Why have a glove box when Lego-like configural dash trays and big bold bag hook will suffice? Why have a ‘Park’ mode for the push-button transmission set into the driver’s seat base near the door) when an old-school handbrake does the job?

You see Ami is truly avant-garde and singularly focuses her cheeky charms on being the most delightful and appropriate city companion. Citroen calls her a ‘global 360 degrees solution for urban mobility’. She’s designed and built to do that one job, but that doesn’t mean she can’t be vivacious and charismatic. From demure grey to vibrant orange, she’s highly adaptable and always chic.
But putting aside her beguiling appeal, is she a fleeting affair with enticing insights into a new way of motoring, or is she a keeper? While currently not on-sale in the UK – they’re still umming and erring about whether to apply for her residency here – in France you could either buy an Ami for 6000 Euros, long-term rent for about 20 Euros a month, or use one only when you need it on a car-sharing subscription service.

And if that doesn’t appeal to your logic, you heart will find it irresistible to fall for Ami once you take her for a drive. No power steering and 0-60 in – oh, sorry, yeah it can barely reach half that speed – might lead you to assume a driving experience encapsulating dreary crudeness. In fact reasonably eager acceleration, steering that lightens on the go, agility that turns on Euro Cent, handling that holds on like a startled cat, and the general novelty of it all, will leave you laughing so hard you’ll drown out all the road-roar and cabin commotion.

Ami is chatty and bubbly, perhaps even bubbly and bouncy if the ride quality is being considered, but the whole is greater than the sum of the parts by a long way. Easy to drive, park, see out of; cheap to run; comfy to sit in, even for lanky six-foot plusers like me, and cosy for a couple; Ami is just eminently likeable, even lovable.

Suddenly, despite being an octane-gargling EV-sceptic, after a couple of miles with Ami, I start coming up with plausible justification to introduce her to friends and family (they’ll love her too of course).

If you live in cities and towns, do only very short journeys, and can keep it plugged in at home, it makes perfect sense. And for younger people, say university students living off campus, a subscription service would be ideal for those days when you don’t fancy the walk to lectures.

The wonderfully winsome Ami needs to move to the UK now. She’s fresh, radical and fun, and after what we’ve all been through, that’s just what we need to lift our spirits as we get out and about again.

Aston Martin DB11 everything you need to know… 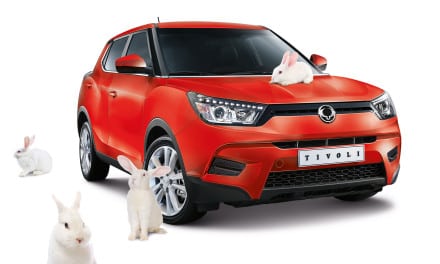 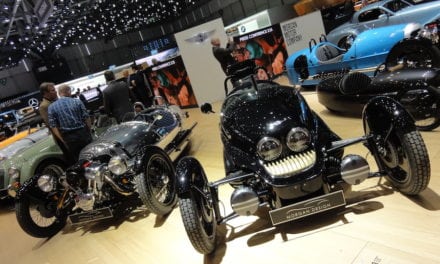 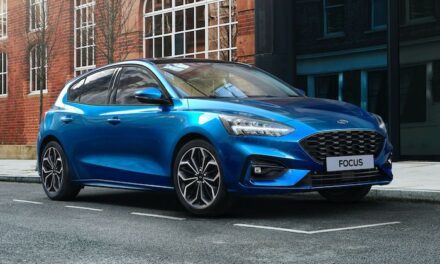